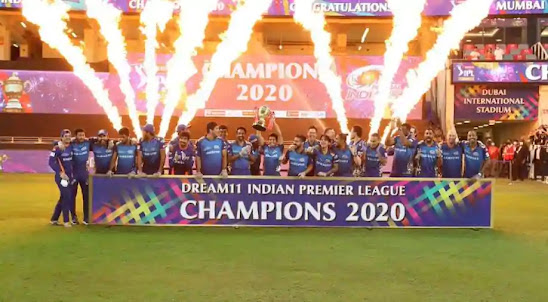 Again the winners of 2020 one and only Mumbai Indians. The Mumbai Indians are a franchise cricket team based in Mumbai, Maharashtra, that competes in the Indian Premier League. It has the largest fanbase worldwide.

Founded in 2008, the team is owned by India’s biggest conglomerate, Reliance Industries, Since its establishment, the team has played its home matches in the Wankhede Stadium in Mumbai.

Mumbai Indians produced a brilliant all-round performance to completely outclass Delhi Capitals in the IPL 2020 final at the Dubai International Cricket Stadium on Tuesday. Mumbai controlled the match from start to finish, winning the IPL final by five wickets to clinch their fifth Indian Premier League (IPL) crown. While Trent Boult was the hero with the ball in hand, captain Rohit Sharma was the standout in the chase after Delhi Capitals could only muster 156 for seven. Mumbai Indians coasted in the chase, overhauling the target with eight balls to spare, with Rohit notching his 38th IPL half-century.

Now it seems like all the IPL teams fight against each other to play in the finals with the Mumbai Indians. Such has been the dominance of this team in the history of the IPL.